The Albaycin - and my first painting.

The Albaycin area of Granada is the old part of town. It's origins are rooted in the Moorish conquest of the city in the 11th century. The roads are extremely narrow and paved with cobbles. Whitewashed buildings give a North African feel to the place.

We are staying in the heart of the Albaycin in accomodation that dates from the 17th century. It has a central courtyard and a rooftop garden but all the rooms are very small. Ten of the 14 students are staying here and we have a nice atmosphere going. The school is 3 minutes walk away and we often have to make our way through organised tourist groups who when they aren't taking photographs are peppering their harassed tour guides with questions. 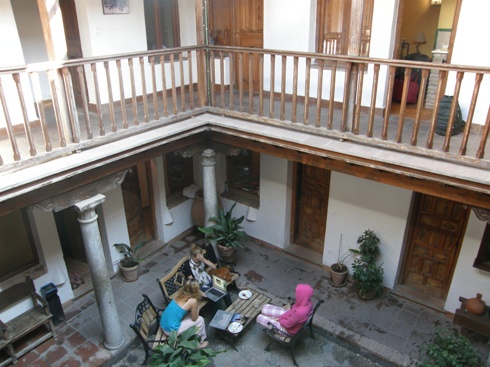 The traffic here is incredibly dangerous. Some of the roads through here are barely wide enough for the buses that trundle through. Right outside my window is one such route. Each bus has to crawl at 3 or 4 mph to ensure wing mirrors are not ripped off and masonry is not damaged. If you happen to be walking through such a road at the time a bus is making it's way down you have to dive into the nearest crevice or spread yourself out over a wall surface. If you are overweight here then you won't survive going outdoors, it's that simple. The bus, car and motorbike drivers show no concession to pedestrians.

It takes five to ten minutes in any direction to wander out of the Albaycin into 'modern' Granada, with it's typically wide boulevards, hotels, banks and globally known department stores. The contrast between the two areas is as stark as it's possible to be.

For different reasons the traffic here is equally dangerous for us Brits. They all drive on the wrong side of the road. In the Albaycin of course there are no 'sides of the road'.

There is a magnificent viewing point at Plaza San Nicolas. You can see the Alhambra in all it's glory from here... 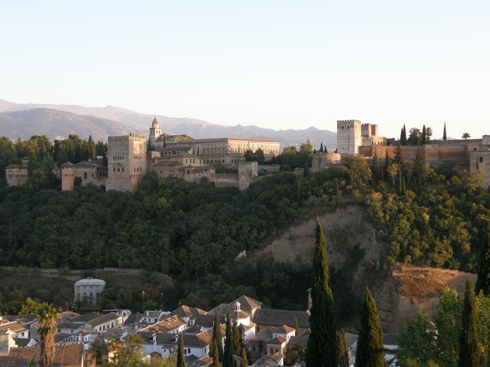 The Alhambra from the San Nicolas viewpoint (Mirador).

The Mirador attracts lots of people and has a real Bohemian feel. Guitarists, jugglers, street hawkers, tourists all come here - to soak up the 'vibe' I suppose.

I took a picture of this guy (below) when I was here last weekend and decided he'd make a good subject for a painting. I got started on Saturday but haven't had any time since to work on it so it remains very much a work in progress. 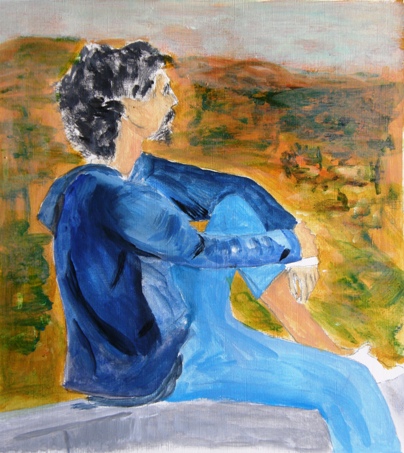