On the Streets of Granada

A big part of my move here to Spain was to try and make a real go of becoming a professional artist. Big dreams I know, but in for a penny, in for a pound. I figured it was time I tested the water.

So on Saturday I ventured into the city to try and sell some paintings on the streets. I was nervous as a kitten and had to fight the flight or fight reflex as I approached my designated area of most opportunity. I'd staked out this area of pavement for a week or two and had chosen it as a likely location due to the heavy footfall and wide open feel it offered. I was encouraged to see how mobbed with people it was as I made my way towards it.

Alas, as I approached I could see two police officers on patrol. The African lads who sell handbags, umbrellas, jewellery and really really bad quality DVDs were picking up their stuff and moving as the cops swaggered arrogantly down the walkway, batons dangling menacingly from their holsters.

I doubled back and sat on a nearby bench to spy on proceedings and soon plod was off, elsewhere. The African lads, old hands at this cat and mouse game, laid their wares out again. My chosen spot still lay vacant so I traipsed on over and began unloading my kit. I tied a length of string between a lamp post and a tree and began hanging my paintings off it with bulldog clips. I then laid a small blanket on the ground and arranged my postcard sized prints and my pricing details. I was thrilled when a middle aged couple strolled over to ask about one of the paintings - I had barely finished setting things out - and the gent was very complimentary to me. 'This will be great' I thought, but really, that was as good as it got. 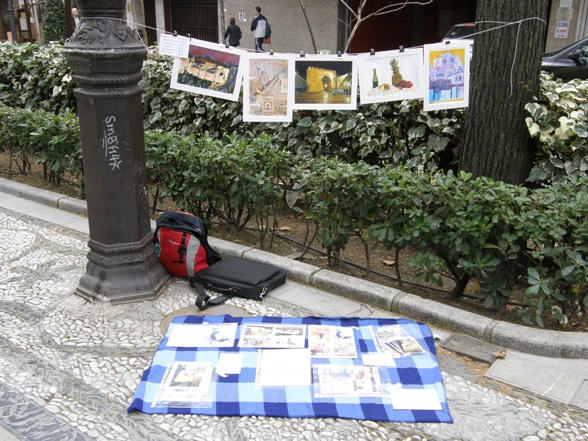 I had a few people show interest, and got some good comments, but no sales.

I was so nervous about the police that I couldn't really relax. A couple of the African boys came over and we shared a handshake and a word of cameraderie but I never really ever felt comfortable. An hour or so later the two police officers returned and we were all forced to pack our things up and go.

Then it started raining and that was that.

I think my display was a bit confusing. I had too many cards detailing different prices and so on and I also think my postcard prints were a hindrance. No one wants a print - they want an original painting. I only had 5 originals on display and need at least twice as many. I need to get better and more efficient at producing quicker, smaller, paintings. It was a great experience though. Selling stuff on the street feels such a raw and engaging thing to do - not that I actually sold anything of course!