I was spaced out for three days last week with cranial abnormalities. I had acute something, which had been caused by a tiny scrap of anchovy residue - no more than 3.7 pico-nano millimetres in surface area, being lodged behind a pre-molar. This trapped but gorgeous fragment of ocean life had initiated an osmotic process by which my brain suffered a severe 'hydro-infusionamo tsunami-poco' (Spanish term) rendering me incoherent, and to all intents and purposes, dead for a few days.

In laymen's terms, the steady and unstemmed leaching of industrial quantities of salt from the anchovy fragment nearly caused my head to explode. I was one of the lucky ones.

The docs (gotta love them) advised me that to avoid future repetition I should brush my teeth better.

I celebrated my release yesterday with a couple of culoperros in El Rincon. I made sure I chewed them properly and  swallowed cleanly. It would be more than a tad embarrassing to be incapacitated for the same reasons again next week.

Of course, this is all tosh, though some people still believe the stuff I write is true.

As a further treat I watched my DVD copy of the Shawshank Redemption last night. The moment when Andy emerges from the 500 metre pipe of poo remains cinematic gold, surpassed only by the ending, when Red walks along the beach at Zihuatanejo (I Wikipedia'd it - you can never make the name out can you?).

I've taken on board some lessons from the film to help me deal with the strains of life in my apartment. 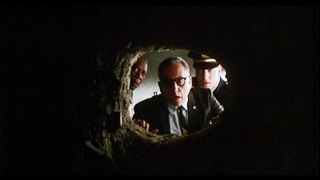 When my noise loving neighbours upstairs go into a chair dragging fest I will imagine them as no more an irritant than when Bogs (in Shawshank) tries ineptly to give me one behind the laundry room. An episode of metallic droppings from above will be akin to a month in 'the hole', survivable by one's ability to replay the memory of beautiful music in one's head throughout, thus rendering the period an actual interlude of welcome pleasure. Listening to 'them' rabbit on about whatever it is they rabbit on about will be no more than a severe beating at the hands of prison screw Byron Hadley, a man who will ultimately get his comeuppance (and will cry like a little girl when getting it).

The best bit will be when I come to leave and Warden Norton puts a gun in his mouth and a bullet through his napper. That'll dovetail nicely with me setting a fecking bomb off in the kitchen as I walk out the door of this place for the last time.