Saint Magnus cathedral set a tone for my visit to the Orkneys. There was an absence of that grandeur one feels in more traditional larger cathedrals and you sensed a real affinity between it and the local population. It’s not merely a building maintained as a tourist attraction but remains an active and genuine part of the fabric and soul of the islands. The other things I saw there too, the various Neolithic, bronze age and iron age sites, had a rawness and lack of polish about them that readily suggested the lives of real people.

Perhaps it’s something you can also feel in some Mediterranean sites, maybe in Pompeii or in other parts of Italy or Greece but I’ve never really felt it in Spain. The ruins, cathedrals, palaces and gardens I have wandered around in Spain, though dating from more recent times, feel inaccessible in many ways, belonging as they did to people unlike those who inhabit the same places today. In Orkney, you feel that there’s a very close link between the current indigenous people and those of historic sites like Skara Brae or the Tomb of the Eagles. There’s nothing polished up and packaged here.

One of the guides, an elderly lady, told a small group of us at one of the ancient monuments about how her life as a child on the island in the days before electricity and running water retained many similarities with those iron age ancestors. When describing the typical rituals of life in an iron age house she could almost have been talking about her grandparents. 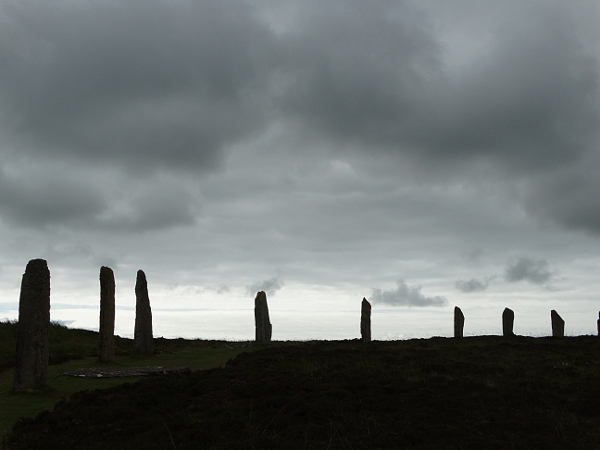 Only while walking amongst the eerily magnificent standing stones do you feel the frustration of not understanding what was going on, of not being able to get inside the heads of those who constructed these places. Their motives, skills and methods remain elusive to us still no matter how many theories are put forward. I suspect whatever ideas we have are some way off the mark to the reality.

Recent history gapes right back at you also. In Scapa Flow the masts and hulls of war time wrecks breach the surface waters. They are a shocking sight when first seen. The Italian chapel, built by prisoners of war (WW2) clings stubbornly to barren land just off one of the causeways. It’s all very very human.

As I saw on Skye bus loads of tourists are pouring onto the islands. This is probably welcome, maybe even necessary for the local economy but I’m sure it comes as an unpleasant surprise to many of the visitors how rough and ready the bill of fayre is awaiting them. The Tomb of the Eagles requires the visitor to hike a mile across a clifftop moorland. The only way into the tomb is to lie flat on a trolley and to pull yourself through a small tight tunnel. It’s cold and it’s damp and I imagine on windy days you may risk being blown into the North Sea. And I went in July.

I left Orkney feeling a huge sense of respect for the place. There’s a lot to see and I only scratched at the surface. It’s another place I hope to go back to and visit. If I did manage to return it would be a dreadful shame to find it gentrified.